He was a member of Bordentown Baptist Church where he sang in the choir.  He was a member of Boy Scout Troop 13 which was a troop of Sea Scouts. This troop preformed many civic duties such as placing wreathes on Veteran’s graves, doing food drives for the poor, and marching in parades. As a matter of interest Oscar Gray was also a member of this troop.  In High School he was a member of the Drama Club all 4 years.  He was also in the Glee Club, he was President of the Stamp Club, and he also played intramural basketball.   It was during high school that he decided to become a doctor resulting in the nick name “Doc.”

Harold attended Johns Hopkins College of Arts and Science (pre-med) in 1933-34.  Due to financial constraints he left school and returned home where he found work as a clerk at Mahady's Drug Store, and Browers Grocery Store.

In April of 1941 he decided to take advantage of a one year enlistment program rather than take the chance of being drafted.  He chose the Army Air Corp.  This program stipulated that in the event of war you were obligated to serve for the duration.  After placement testing he was assigned to bombardier training. June 30, 1942 he received both his wings and the commission of 2nd Lieutenant.

In November 29, 1943 he was promoted to First Lt. and was assigned to the Army Eighth Air Force in England.  He was promoted to Captain in May of 1944.  During his first tour of duty he flew a total of 25 combat missions, from November 1943 to June of 1944.  During his second tour of duty he was designated as Staff Bombardier in September of 1944.  By the end of his second tour in May of 1945 he had participated in 47 combat missions.

He was honored with many awards among them were the French Croix de Guerre,  which was presented to him by Gen. Martiel Valin, Chief of Staff, French Air Force on March 9, 1944. He received a Presidential Citation, a Distinguished Flying Cross with 4 Oak leaf clusters, 5 Air Medals, and 3 Purple Hearts.

In June of 1945 he was promoted to Major and assigned to Bradley Field, Connecticut in July of 1945 and Gulf Port Mississippi in January of 1946. Then on to Rosswell Field New Mexico in April of 1946.  May 1 of 1946 he reported to Kwajalein Island to begin training for the Bikini Test.

“For a man whose decisions will rule the activities of 42,000 participants in the world's greatest experiment Wood is a marvel of humility.  He knows better than anyone that upon his judgment and his aim depends a bombing mission the entire world is watching...

Originally there were to be three trail runs before the bomb drop with Wood holding the option of dropping it on the fourth or fifth trip.  That was changed today at his own request.  Wood was given permission by Admiral W.H.P. Blandy, director of Crossroads, to drop the bomb any time he feels conditions are proper after the first run over the target.

Wood probably spent the worst day in his life yesterday when he was subjected to the queries of more than 100 newspapermen.  He smiled through it all and came out unruffled, that's why he was picked for the touchiest peacetime bombing mission of all time. Wood is psychologically perfect for the job.  He just doesn't care about much but hitting the target.  If he misses, he can get another job.  That's his attitude, and 118 correspondents failed to upset it.”

Major Harold Wood released the bomb from an altitude of approximately 6 miles on July 1, 1946.

“Operation Crossroads” had been ordered by the Combined Chiefs of Staff in Washington, would be carried out under the command of Vice Admiral W.H.P. Blandy, Commander of the joint Army- Navy task force.”

In June of 1950 Wood graduated from the Air Command and Staff School at Maxwell Field Alabama.  In October of 1950 he was promoted to Lt. Colonel.

On April 30 of 1953 he was called to the Pentagon for 6 weeks and in February of 1954 he was stationed at the Pentagon.  He was assigned to SHAPE (Supreme Headquarters Allied Powers Europe) in France during this time.

In June of 1957 he was sent on a special assignment to Oslo Norway for Army Air Corp Intelligence that required him to wear civilian clothing for this secret mission which he never revealed to his family. Upon his return in May of 1959 he reported to the Pentagon for duty. In July he received the title of Master Navigator. He served there until September of 1963.

In October of 1963 he was named Executive Officer in the 822nd Air Division headquarters at Turner Air Force Base in Albany, Georgia, where he decided to retire to his home in Bordentown to care for his aged mother.  He was discharged from Fort Dix, New Jersey in July of 1965 after 24 years of service. 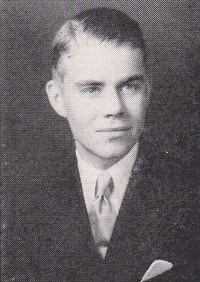