Irish Billy Briggs (William Russell Briggs) grew up in Bordentown.  He was the grandson of Francis Kelly, son of Geraldine (Kelly) Briggs and Russell Briggs (a World War II Veteran). The Briggs home was a warm and welcoming place where his mother always made sure there was enough food for anybody that happened to drop by. It was a household that was filled with music; Billy's Dad and his six siblings entertained for any worthy community event. He inherited his strong work ethic and of giving back to the community from his father who worked three jobs and his mother who was a gracious and generous hostess.

At 12 years of age he opened his first business. This was the famous lemonade club (The Cobra) at the back of his home on Prince Street. This business was so successful that he spent the rest of his life as a self employed business owner.  After graduating from Bordentown High School in 1970, Billy joined the Navy spending his time as a seaman on the U.S. Navy aircraft carrier, USS Midway, during that time Billy was involved with the evacuation of Saigon. As a diversion from the conflict, he formed a Country /Irish band which kept his fellow seamen from getting homesick.   After his four years of service to his country, Billy returned to the Trenton/Bordentown area where he ran many successful businesses.  His last business, The Tir-na-nOg (an Irish Pub) turned 20 years old this year.  The Tir-na-nOg was voted on of the top 50 best bars in America by Men's Journal, top 50 Irish Pubs in the U.S.A by The Irish Voice, and top 50 Irish Pubs in the tri-state area by readers of the Irish Echo.

His love of American and Irish history lead him to believe that Ireland, like the USA,  should be free from English rule and Catholics should have equal rights in the North of Ireland.   Billy used his talent as a speaker, musician and song writer, to highlight these injustices.  His bar played an important role in the Peace process in Ireland.  Many important politicians, such as George Mitchell, Bruce Morrison, Gerry Adams, with the Governor and local politicians met with Billy atThe Tir-na-nOg on Hamilton Avenue, Trenton.  Billy was Awarded "The Irish Patriot Award", 2008 by the Vice President of Sinn Fein, Patrick Doherty.

Billy never forgot the hardships in his own back yard.  The Mercer County chapter of the Sunshine Foundation planted a tree in his honor at the Sunshine Village near Disney, Florida. Anchor House, the Trenton Area Soup Kitchen, and many other local and Irish organizations have also presented him with Awards for his humanitarian spirit, generosity and work.   Billy has helped many people without ever seeking publicity for it. Irish immigrants have praised Billy for making them feel welcome. He is known to have given many Irish immigrants a start in this country.  He provided friendship, food, furniture and job contacts and many are now successful Business owners.

On March 17,2011 Hamilton Township paid tribute to Irish Billy Briggs with an honorary street sign dedication on Hamilton Avenue, Hamilton Twp/Trenton. Their Proclamation honors his dedication to his local and Irish organizations. Tom Fox ,the author of the recently published book "Hidden History of the Irish of New Jersey" included Billy under the title of, "The Forgotten Chosen Ones"  Canals and Pubs of old .. He describes Billy as the Iconoclast Pub Owner…  An Unique New Jersey Irish-American.

Another of Billy’s passions started when he took part in the musicals during his school years.  He was an Off Broadway Actor trained under the Abbey Actor, Chris O'Neill at the Irish Repertory Theatre in New York.  He played many leading roles and everybody's favorite was as an English Lawyer in the play, Peg 0 My Heart!

Billy had the honor of singing for Ted Kennedy, Mary Roebling, and many Governors, however he sang with the same gusto for rich and poor alike.   He inspired many young Irish American music groups and took many of his singing colleagues on trips to Ireland with the belief that this was the best way to understand Irish Songs.  He has even composed his own songs. "It's Going to be a Grand St Patrick’s Day" is his most thought provoking song.

He had many hobbies and interests in life. He loved to read.  He never minded long waits at the bank, doctor’s office, as he always had a book to read; the doctor or teller was often waiting for him! He was a world traveler and a very engaging person.  His travel to India, courtesy of the Rotary club, showed him how the poorest have to live. Billy was known as a man that had an in-depth knowledge of life and its complexities. He was inspired by his history teacher, Mr. Paul Lipiarski who allowed him to do independent study on the history of Ireland and his music teacher, Mr Karl Megules, who so inspired him that he kept his trumpet as a reminder of his Band days at Bordentown High school.

Billy Briggs married Margaret O'Donnell a native of Clonmel, CO Tipperary, Ireland.  They have two daughters, Ellen and Mairead, who inherited his talent and good humor.   His wish for them is a great education and finish college. He believed an education is a ticket to a life of choices, plus nourishment of the mind and soul.

His daughters gave him his last gift of a New Jersey tomato plant on Father’s Day in 2008. He opened his eyes and smiled at them and later on that evening took his last breath.   Billy is buried with his book and glasses by the Scared Heart Church, Killusty, CO Tipperary, Ireland. 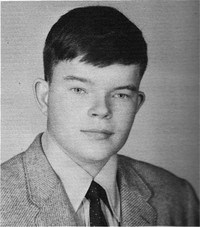