Roy Van Ness was graduated from Bordentown High School in 1938.  He then attended Trenton State College majoring in Health & Physical Education. After graduation he enlisted in the Army Air Corps during World War II where he earned his wings, and became a pilot for a B-24 bomber.  When the war was over he received his masters degree from Columbia University.  He returned to Trenton State College as a faculty member teaching both undergraduate and graduate studies.   During this period, he was awarded two Fulbright Awards: in 1947 to Baghdad, Iraq, and in 1961, to Bangkok, Thailand.  In Bangkok, he coached their national basketball team to an undefeated championship.  He instituted the Athletic Department at TSC and became its first full-time Athletic Director.  During his leadership, TSC received national acclaim for earning the highest number of national championship in Division III of the NCAA, and for the installation and development of outstanding athletic facilities.

He lived in Pennington, N.J. taking an active part in civic projects and pursues a wide variety of interests including music and Early American History. 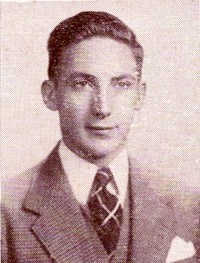