Mae Hamilton was born and raised in Bordentown City by her loving and devoted parents who were also dedicated to the community. Bordentown School #1 was her introduction to the education world. Her teacher taught her not only reading, writing, and arithmetic, but the importance of getting a sound education. After grade school, Mae continued on to William MacFarland High School where she learned the value of being involved. Mae had earned her Olde English “B” by her junior year which was quite an accomplishment because very few were earned in athletics; Mae was a polio survivor with limited muscle control in her left foot and leg. In 1945, she graduated as Salutatorian of her class. Upon obtaining a scholarship to Rider College, and graduating, Mae was hired by The First Mechanics National Bank of Trenton as a secretary in the Trust Department.

As a member of the First Presbyterian Church in Bordentown, she served as Sunday School Teacher, treasurer, Trustee, Deacon, and Women’s Service Guild. For fifty years, she has helped in preparing and serving of their famous Oyster Supper in Bordentown City.

Mae married her classmate Bill Hamilton and moved into Bordentown Township. When the first of her four children was born she left the workforce and became a full-time “mom”. All four of her children attended Bordentown public schools where she became involved in P.T.O., High School’s Principal Advisory Committee, Superintendent’s Advisory Committee, and attended a multitude of School Board meetings. She also was hired as a teacher’s aide for Peter Muschal School.

She is extremely proud that all of her children went to college; three became teachers and one has a successful career in business.

Through the years, she has enjoyed many roles living here in this small community; delivering Meals-on-Wheels to shut-ins, working with the Township Seniors on the Veteran’s Day Ceremony, Christmas Tree Lighting, Memorial Day and Community Day programs. 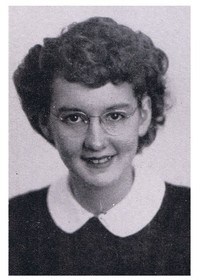