Following graduation, Mrs. MacKinnon worked for Mrs. Anna T. Burr, principal in the high school administration office.  Shortly thereafter, she was hired on a part-time basis by the City of Bordentown.  Within two years of her hiring she was made Acting Tax Collector.

Mrs. Mackinnon has since held many official positions in our community.  Among these positions are the titles of Tax Collector, City Clerk, Treasurer and Custodian of School Funds.

After 43 years of service to the Bordentown community, Mrs. Mackinnon retired from the positions of Tax Collector and Treasurer. At the time of her induction she was a very active member of the community through her membership in the Trinity Methodist Church and the Bordentown Chapter of the Order of the Eastern Star. 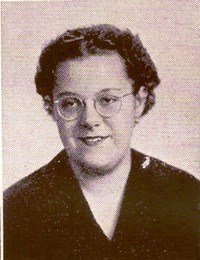