Joseph Groveman (Joe) born January 22, 1921, son of George and Jennie Groveman arrived in Bordentown in 1921.  Attended Clara Barton School and William MacFarland  (Bordentown Regional High School) graduating in 1938 in the upper percentile of the class.  During summer vacations I worked with Dr. James Herron, the local veterinarian and also worked on various dairy farms.  I am sure this helped my being accepted to the University of Pennsylvania class of 42 & Veterinary School Class of 43.  I enlisted as a 2nd Lt. in the army reserves in 1940 and went on active duty as a 1st Lt. in the army Veterinary Corps.  We were attached to the Quarter Master Branch.  While in the states, our primary duty was overseeing proper food and dairy inspection for all branches of service.   Promoted to Captain and assigned to the Third Army for overseas duty.  When we were flying overseas word came that VE Day had arrived – new assignment Military Government in Bavaria, Germany.  Landed in Frankfurt, then Munich and final destination Regensburg, 60 Km north of Munich Military objective – de- Nazify all civilian veterinarians, reestablish the mounted Constabulary troop in Berlin where I served as a member of the Quadripartite Council of Veterinarians formed to reestablish the German civilian veterinarians, as well as the fairy and meat packing facilities and other matters concerning public health.  The Council consisted of the British, French, Russians and ourselves.  One memorable comment about our meetings, there were always three positive votes and one Russian negative vote on any given subject.

I received orders to return to the states in late October 1946.  Embarked from Bremerhaven on a Liberty Ship – two days out we encountered one of the worse North Atlantic storms on record.  A colleague and I were the only guys not seasick.  We wore ourselves out carrying men up from the hold to the deck for fresh air.  To this day that odor has not been forgotten.  Fortunately, everyone survived that crossing and we all ended up in Fort Dix for discharge.

I was very happy to be back in Bordentown with mother, Jennie, dad George, brother Dr. Merv & sister Thelma.  My father who was a charter member of the Bordentown Rotary Club immediately proposed me as a member and has been actively involved for 57 years.  A wonderful organization I obtained a position working for a Miami veterinarian for two years.  I came back to New Jersey and practiced with my brother Merv in our hospital in Linden,N.J.

I married in 1948.  In 1951, changed professions and joined the family business due to a break up in partnership.  Became a vice president of Foster Industries manufacturing men’s and children’s apparel and sportswear.  We were primarily private label manufacturers catering to companies such as L.L. Bean, J.C. Penny, E.M.S., Target, Sears, Cabella, and Bass Pro etc.

I have three sons, Daniel, Andy, and Jon and a daughter Jane, 12 grandchildren and one great grandchild.

A few comments going back to my grade school days, Frances Weavat, my third grade teacher definitely had an influence on my life.  She was a strict disciplinarian but in a nice way.  Other teachers that I had a lot of respect for were Christine Fithian, my favorite biology instructor and mentor when I was editor in chief of the Fabella Yearbook.  Carl Smith a no nonsense educator, a wise English teacher Mr. Baldeagle; Helen Justice who inspired me to play clarinet in the school orchestra for four years, for better or worse.  Of course, Anna T. Burr our principal who was positively an ace.

Just a word or two about Rotary International.  We sponsor the world’s largest exchange student program in the world.  We have wiped out polio in the third world countries with the exception of one small country in Africa which we are currently working on.

One task that unfortunately was not pleasant but satisfying, as a trustee of the NY Rotary Foundation I volunteered to head up the 911 committee to distribute 11.4 million dollars that Rotary Clubs worldwide sent to our club for aiding the victims of that tragic event. 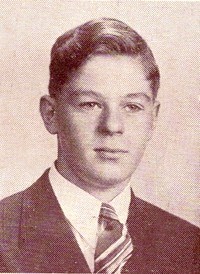