Bob graduated in 1942 from William McFarland High School.  Five days after his graduation he enlisted in the U. S. Navy.  He was an original crewman of the USS Lexington, CV-16, a fast attack carrier.  Bob was the fire control director of a quad 40mm anti-aircraft battery, the primary anti-aircraft weapon of the U. S. Navy during WWII.

The USS Lexington saw extensive combat and was torpedoed in 1943 and hit by a kamikaze in 1944.  All told, Tokyo Rose reported the USS Lexington sunk four times during the war.  Not only did the Lexington always return to battle but was the first U. S. aircraft carrier to enter Tokyo Bay in late August of 1945.  Robert was awarded numerous awards and commendations, including a Presidential Unit Citation (w/ Bronze Star) and 11 battle stars.

After his discharge from the service he was employed by the National Biscuit Company (Nabisco) as a sales representative.  He retired from Nabisco after 22 years of service.

Robert has a long history of community involvement and service.  Years ago he coached youth baseball and basketball and was the first male President of the PTA at Lanning School in 1959.   He served Meals on Wheels for twenty years.  He was an active member of the Lions Club for 25 years and is still a member.  He is also a long time member of the American Legion.  He has been a member of the First Presbyterian Church of Ewing for over 50 years.  He served as an elder, deacon and was on the Session.  He was also on the Church Cemetery Board of Directors for 25 years.

In 2002, Ewing Township recognized Bob as a Volunteer of the Year.  His extensive community involvement is even more impressive when you consider he lost his eyesight, probably service connected, and has been legally blind since 1971. 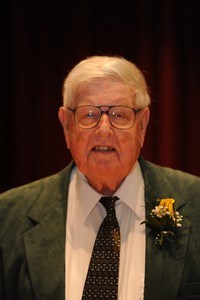