Lillian F. Reeder graduated from William MacFarland High School in 1936.  She married Frank Reeder and raised 3 daughters.  During the early years, she traveled extensively with her husband who was a Field Service Erector for Koppers Inc.

Mrs. Reeder has received the following awards and honors:  1979, Outstanding volunteer from Office of Aging; 1979, Outstanding Citizen for the State of N.J.; 1980, A Grand Marshall of Halloween Parade; 1984 American Legion Award (for leadership, meritous service to the community); 1985 Medal of Honor from the Daughters of the American Revolution (National State Award).

At the time of her induction, Mrs. Reeder was affiliated with the Dept. of Health and Human Services in the United Methodist Church, a position held since 1969.  She was Welfare Board Secretary for Bordentown City and has been with the Office of Aging in Burlington County since 1978.  This includes the Outreach Program, Vial of Life, P.A.A., and Lifeline Heating Association.  She was manager of the Senior Citizen Nutrition Center in the Trinity United Methodist Church and has been a chair person of the Salvation Army in Bordentown since 1980.  She was also a noted lecturer on Early American pressed glass for 15 years. 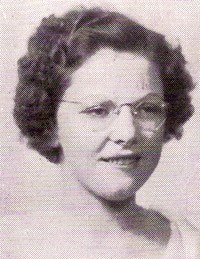