Howard Wilkie was born on May 25, 1923 to Kenneth Haines and Anna Mae Wilkie. He had a younger brother Robert. Howard married Leatrice Margaret Wilson, who was a classmate, in 1950, and they had five sons – Kenneth Edward, Gary Thomas, Keith Robert, David William, and Craig Hamilton.  Attending the Florence school system until ninth grade, Howard graduated from William MacFarland High School in Bordentown in 1940. At that time, all Florence students went to Bordentown for grades 10-12. Howard was the first person in his family to graduate from high school. Howard then attended West Virginia University while in the U.S. Army and also attended Temple University and University of Pennsylvania for courses in metallurgy.

During World War ll, Howard was a 2nd lieutenant in the U.S. Army Air Corps. He served as a navigator on a B-17 and E-29 and was awarded a medal for sharp shooting, 1942-1945. Honorably discharged, he was also awarded the Purple Heart for wounds suffered in combat. After leaving the military, Howard served two years as Commander of the Francis W. Robbins American Legion Post 194.

Employed by the R. D. Wood Pipe Factory (Griffin Pipe-Amstead Industries), Howard started as an office boy at age 16. Retiring in 1972 after 33 years service, he was Chief Inspector; nothing came in or out of the plant without his approval. Howard’s hobbies included wood cutting, playing cards and architecture. He drew plans for his home, which he built in 1955, and initial plans for the Florence American Legion and V.F.W. in Roebling. An avid sports fan, he played baseball, softball and bowling and was an accomplished Master of Ceremonies at many events. Ironically, Howard was buried the day of his 50th class re-union at which he was to be the Master of Ceremonies. 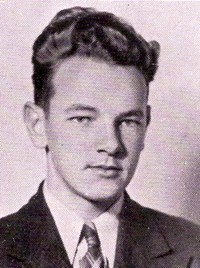