Charles Adams was in the first class from Florence to graduate from MacFarland High School, Class of 1932.

He received his accounting degree from Rider University and then was employed with the State in Municipal Accounting. At this time, he also attended Rutgers and received his BS in Education. He served in the U.S. Army during World War II in a field artillery unit and was  then sent to Fort Sill, Oklahoma and became a 2nd Lt. FA 1. He was a Captain upon his release from the Army in 1946.

In 1949, Mr. Adams was elected to serve in Florence on the Township Committee and served for seven years and then he served as a Burlington County Freeholder for one term.   He was appointed the first Township Administrator for Florence Township serving from 1972 until 1979 when he retired. Mr. Adams also served as the commander of the American Legion Post 194.

In addition to his public service, he has been a successful business man serving on the Florence Savings & Loan and later at Bordentown Peoples Saving & Loan Board of Directors.

Mr. Adams was married and had one daughter and two sons. He moved to Homestead a few years ago after being a life long Florence resident. 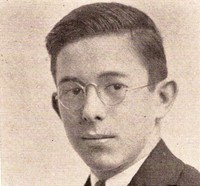